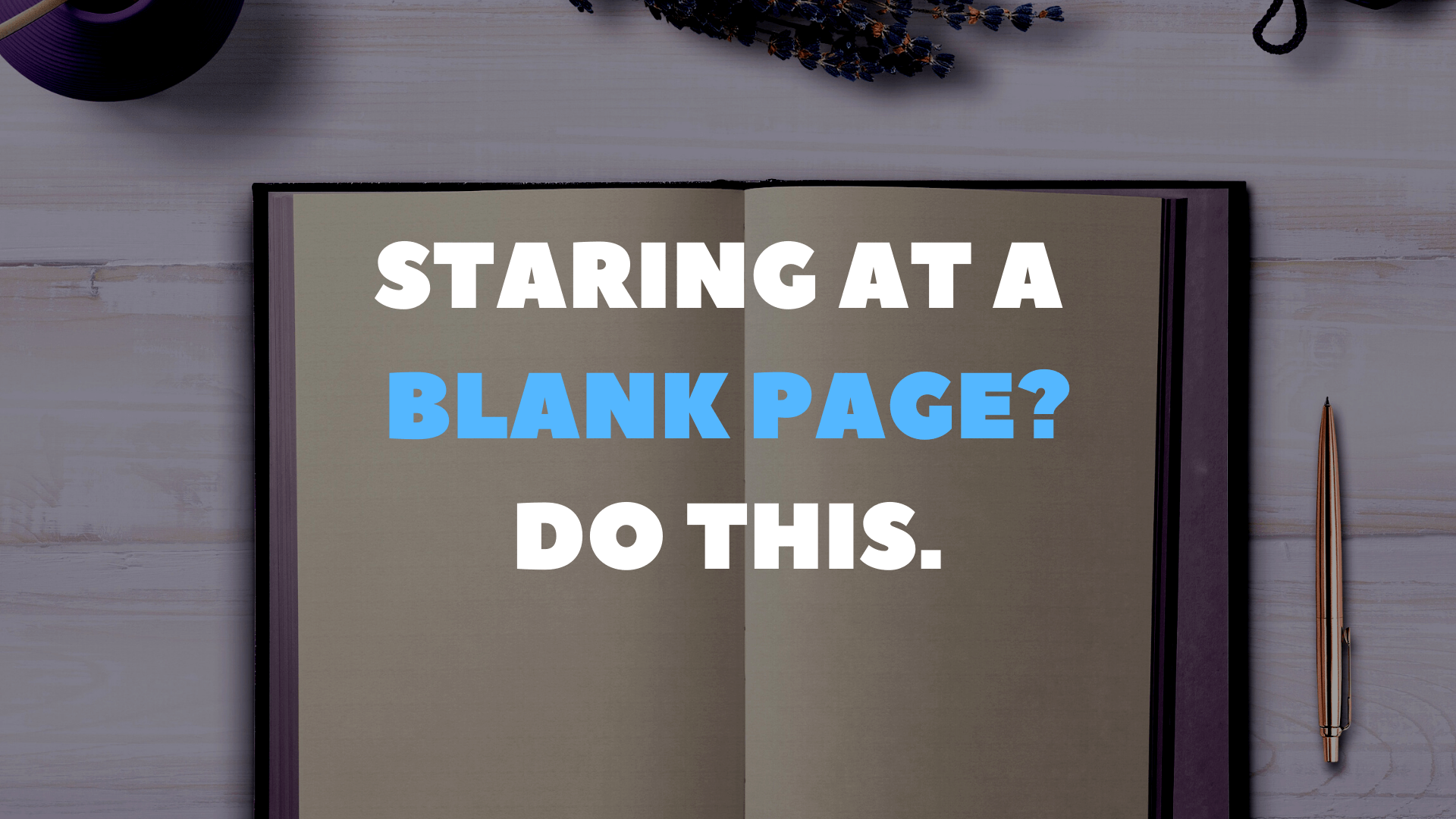 Note: This post has little to do with copywriting or marketing, it’s just something that’s been on my mind for a while and that’s been sitting in my to-do list for months.

Your fingertips are hovering on the keyboard, and on the table a warm cup of coffee awaits you. You FINALLY have a few hours in your calendar for undisturbed creation.

Nothing can hinder you from writing the best damn blog post/article/best-seller/post-it note.

And suddenly it’s been 30 minutes and you haven’t typed a single word. The warm cup of coffee has gone from lukewarm to cold to undrinkable.

The motivational surge you got from Instagram is long gone, and you’re still staring at a blank page.

Everyone struggles with this at one point or another.

And I’ll let you in on a personal secret…

This was me one hour ago. When my calendar alarm went off, brazenly informing me that it’s blog post time.

And, funnily enough, after 24 minutes of me whining to myself that my coffee wasn’t hot enough (obviously preventing my creative juices from flowing) I decided to write about the one thing that kept bouncing around in my brain.

Writer’s block. And how to beat it.

Most would agree that inspiration and creativity aren’t endless sources that you can tap into whenever you feel like.

And I tend to agree…

But despite that, this isn’t an excuse for inaction.

It’s better to see these things as muscles instead of some static entity that you cannot control. These muscles can be trained the same way you train your biceps by lifting heavy weights at the gym.

Exercise your inspiration and creative muscles by constantly taking them to their limits.

In my younger years, I was heavily into producing electronic music. One of the best pieces of advice I got from my successful peers back then was to sit down and just do the work, no matter how uninspired I felt like.

There’s always something you can do.

No idea what to write about? Research what others have done.

Sentences are clunky and lacking some oomph? Rewrite a few chapters of your favorite authors.

Few of us have the divine gift of just being able to turn on the inspiration feed like a faucet. This skill is parcelled out extremely unjustly at birth. If you’re able to, great! If you’re not, well, then you’re probably reading this post.

But the more you do something, the better you become at it. This also rings true in areas you wouldn’t normally expect it to.

Every time you don’t feel like writing or feel like you don’t have anything to say, simply force yourself to scribble a few pages together anyway. Or do something that’s also an important part of writing. Cleaning your office, however, does not count.

Every single writer in the history of the world has faced days when creating meaningful prose just simply doesn’t seem to be possible.

And what distinguishes successful writers from unsuccessful ones is how they responded to this hurdle.

You already know what the right decision was.

The actual quality of the work isn’t too important. You have to realize that this is part of an on-going, never-ending process. By not giving in to laziness brilliantly disguised as writer’s block, you’ve exercised the creative part of your brain. The next time you face the same challenge it’ll be 0.5% easier to overcome. Same thing the time after that.

The only way you’ll lose on this is if you give up and give in to lazy thoughts like:

‘I can’t think of anything to write about. Maybe I’ll get some inspiration from Netflix’

‘I can’t get inspired in this dirty room. I don’t think I’ve cleaned it since the last writing session!’

‘It’s impossible to come up with anything creative without sipping on a caramel-pumpkin-spice-mocca-latte!’

Write like a madman. IGnore typos and possibly silly passages. You can edit it later. But you can’t edit an empty page.

Pomodoro timers. Set an alarm 25 minutes in the future, and don’t take your eyes off your document before it rings. Take a 5 min break, move around a bit, then return and start again. Here’s a site that helps you with this: https://pomofocus.io/

Online dictionaries. Two I use are http://powerthesaurus.org and https://rhymezone.com/. Viable tools to add to your arsenal.

Grammar correction. If you haven’t already heard of Hemingway or Grammarly, I’ll be surprised. I’ve linked them anyway, just to be sure.

Retype old classics. A fresh new take on writing old classics is https://www.typelit.io/. It’s originally meant as a tool for learning touch typing, but it works just as well to learn and swipe the best literary devices used by authors such as Fitzgerald, Dickens, and Austen.

To conclude, there is no way or simple trick that would make you instantly write the screenplay of the century after not being able to piece a single sentence together. What you have to do is just battle through it. And only you can do that. No one can write the pages for you.

Learning and improving at copywriting is not a difficult process. But it takes dedication and time. How do you learn to write better copy, faster?

This post is copied from today’s newsletter. If you want more laidback but informative ramblings on email marketing straight to your inbox, you can sign up for it here.

This cacophony of email copywriting tips was initially intended as notes to myself. Realized you might be interested in them as well. (Sidenote: read to the end for a bonus.) So, here they are. 1. One email, one offer. Email is much like warfare. But one thing’s different. Shotguns are worthless. $0. Precision bolt-action rifles…

What I’ve noticed over the past weeks in my consulting gigs, is how many companies seem to misinterpret the core concepts of marketing and advertising. Don’t get me wrong, everyone I’ve worked with have been exceptionally talented at what they do…