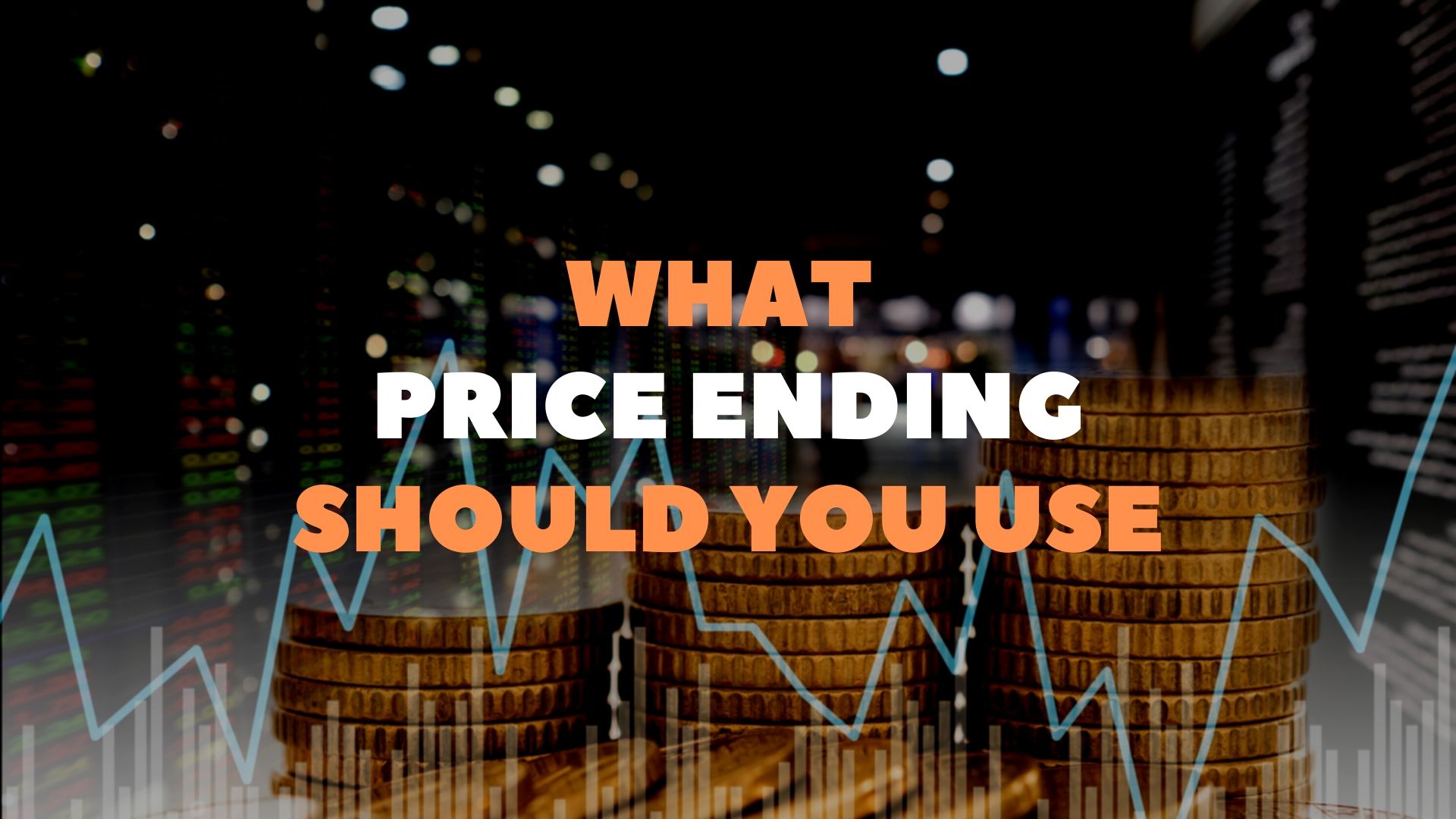 Something that always puzzled me was how virtually no one uses prices ending in ,00 anymore.

Until recently, I never really understood why basically everyone prices that way.

I also wondered if the last digits of a price tag actually make any difference.

Turns out it does.

Here’s the short answer to what price ending you should use.

Because research shows that the price isn’t perceived as lower by customers, as opposed to when prices end with 99 or 49.

But that is the short answer.

The long answer is a bit more convoluted, and includes a few “depending on” phrases.

First of all, customer perception is built up over time as a reaction to the pricing strategies producers use.

In other words, if everyone uses ,99 pricing (or “odd pricing”), maybe you can stand out by using ,95 (or “even pricing”) price endings.

Your price ending strategy needs to be adapted into the context of your niche, taking into account what your competition is doing, and how your customers are reacting.

But as a starting point, research shows that it’s better to favor .9 endings above all others. If you’re interested in hearing why this is, read on…

Why do price endings matter?

The reason why you’d put even a few seconds of thought into this, is that customers or humans in general tend to ignore the rightmost digits in a price.

For each situation, consumers choose an ‘‘optimal’’ decision rule by trading off the accuracy of the rule against the mental cost of using it.

Put differently, when people need to make choices, they balance the “best” decision with the cost of actually choosing it, and then do something that’s almost as good, but doesn’t take as much energy.

This is commonly known as the path of least resistance.

So in the context of price shopping, the eyes quickly scan the prices left-to-right (in Western countries) and see that something costs 49 dollars and some cents, instead of 49,99.

This is a learned trait that goes thousands of years back.

And it’s nothing that we can turn off.

It is programmed into our lizard brains – our oldest part of the brain – to spend as little energy as possible on whatever we’re doing.

Why do you think microwaves exist? Why does every single TV nowadays come with a remote? And why does everyone use Bluetooth headphones instead of old corded ones?

Here’s why you should use prices ending in 9

The rightmost digits most often used in pricing are 0, 5, and 9.

From past studies on this topic, several advantages of using ,9 endings have been spotted:

Some have even gone so far to state that ,99 are better, because the 99 looks like eyes looking at you, which makes you give more attention to them.

I couldn’t find any info or studies that would make this anything else but a suggestion, so take it with a grain of salt.

I did find studies that criticized price ending strategies that end prices in 9.

The general line of thought in those studies was that high-price conscious customers (aka people who are very picky about price and who are likely to shop around for the cheapest alternative) do not respond well to this strategy.

But there’s nothing suggesting that these customers would respond better to any other option. Just the mere statement that they respond worse than other customer groups to this tactic.

So in other words, it does not really matter, as whatever price you put, these customers will always be very calculative in their buying.

Could prices ending in 5 be superior?

According to research, no.

All the positive price ending effects i could find were tied to prices ending in 9. I couldn’t find any promoting 5’s.

The only time it would be viable to use endings such as these, were if all other prices were priced differently.

Then, people might focus more on that specific product as it would differ from the rest.

The odd-even pricing debate is one I don’t follow with much interest. To me, this seems to be settled already, with a clear winner. That being said, exceptions will always be found.

What’s important to remember is that customer experiences are molded by both what we see and hear, but also by what we don’t.

As such, the environment and the prices seen around the product do matter. A price cannot be decided in a vacuum.

If every product is listed with prices ending with ,99, and ONE product ends in ,95, visitors will notice that product. And vice versa.

Businesses can also, over a longer period, change how customers perceive prices. Perceptions also change depending on the niche.

So, while all the data points to ,9 being better than any other number ending, your own situation in your niche might be different. It probably won’t be, but that possibility cannot be excluded.

If nothing else, go with ,9. If you notice that everyone else in the niche prices that way ,9, try the opposite.

The absolute best way to find the true answer to the question of what price ending you should use is the same as always. Test all the alternatives yourself, if you can. Set up a split test where all the other variables are equal, and run the numbers.

If the results you get indicate something completely different from what me or anyone else has written or said, trust your data.

Chan, HH & Chen, FP (2014) When is a 9-ending Price Perceived Lower Than a 0-ending
Price? The Moderating Role of Price Consciousness. International Journal of Business and Information.

Shugan, S. (1980) The Cost of Thinking. Journal of Consumer Research.

Maslow’s hierarchy of needs. Hugely popular in academia. But what’s it good for? How can marketers and copywriters use it? Read on to find out…

The Beatles would’ve been great at email marketing. “Huh? Emails weren’t even around back then…” Yea I know. Bear with me.

Scroll down this page, all the way to the bottom. Notice how it says “Have a great” and then whichever day of the week it is? That’s a great way to differentiate yourself from the millions of boring legal footers businesses have. If you want to… Brand yourself as a fun, innovative, and creative business…

Promoting your content and offers on Reddit is an ungrateful task. Do it wrong and you’ll get hate from anonymous users who are masters at critiquing and hurting you to your very core. Do it right, however, and your site might be “broken by Reddit”. Meaning, you’ll get such a large influx of visitors that…